Press enter to begin your search

Our summer internship is with Group Discovery and Geosciences in the Anglo American Technical and Sustainability division. We were both motivated to undertake this internship with Anglo American and WIM in order to gain exposure to industry whilst learning from the industry experts.

Anglo American appealed to us as a diverse and dynamic place from which to learn at such an early stage in our careers and we were really excited to work for a company with sustainability as a key focus with such a wide range of commodities.

We were based in the London Corporate Office for the first two weeks. The office is host to over 500 staff with skillsets ranging from business to engineering and, of course, geology! Initially, we thought that we would be based in the London Corporate Office for the duration of the internship but much to our delight, on our first day, were informed that we would be working in South Africa for four weeks. There, we would be based at Mokopane, in the Northern Limb Exploration Core Yard, which is located in the Bushveld Complex, an area renowned for Platinum Group Elements.

The first two weeks in London really helped to prepare us for our work in South Africa. We began by having an introduction to the Bushveld Complex and magmatic deposits. We gained insight into some of the research that has been undertaken on the Northern Limb and the many questions and knowledge gaps that remain.

Our main project is working with hyperspectral data from boreholes in Northern Limb. In recent times, hyperspectral imagery has been used on cores in order to view alteration minerals which cannot be seen with the eye. This new data could provide increased understanding of alteration assemblages and their relationship to lithology and grade.

While in London, we also had the opportunity to meet with the Geomodeller who works on the Northern Limb. This was a fantastic introduction to the uses of Leapfrog and the complexity of the models that the software can build. Additionally, it gave us a good chance to see the latest understanding of the geology of the Northern Limb of the Bushveld Complex. 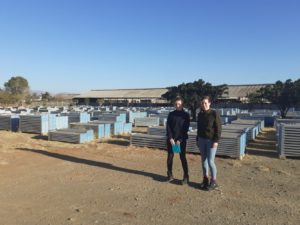 Ellen and Rhiannon at the Northern Limb Exploration Core Yard.

The time we are spending in South Africa is opening up an array of new opportunities as well as the challenge of adjusting to the new working environment. During our first week in South Africa, we spent some time getting to grips with the geological software. Geosoft and Leapfrog are valuable geological modelling tools which can be used to understand the deposit in 3D, which we can use to understand the hyperspectral data.

Initially we were introduced to the software by a series of tutorial videos and interactive guides. At the beginning we found getting to grips with the software challenging, however upon working with real datasets from the Northern Limb it became easier. We began to understand the Geosoft tools relevant to the project by immersing ourselves in the data which enabled us to begin making observations and finally, interpretations. The experience taught us the value of utilising the valuable experience and expertise from both outside the company as well as internally, and the process of working independently as a good way to grasp new concepts but to also gain insights from others who understand the software and project better.

For the project we are studying hyperspectral data from boreholes in two adjacent areas. Initially we began by working on the data and classifying it separately from each other. However, as we began to discuss the data we were looking at, we realised that our classification was not consistent and that it would be beneficial to the project if we could develop a classification scheme to use across both areas. This would also be useful for any persons we hand over the project to in future. On reflection, this would have been good to develop earlier on in the project. This was an important lesson to learn the value of communication whilst working within a team in order to improve the overall outcome of the project.

We have really enjoyed working with Anglo American, both in the London Corporate Office and the Exploration Core Yard. Seeing the different roles and operations across the company has been invaluable learning experience and has given us a greater awareness of how the mining industry works.

For the remainder of our internship, we hope to further develop our practical skills. In South Africa, we are looking forward to enhancing our core logging and data analysis ability. On our return to the UK, we will present our final interpretations.

These past four weeks have opened our eyes to a range of geological skills, job roles and work environments, and we can not wait to see what the next four weeks brings! 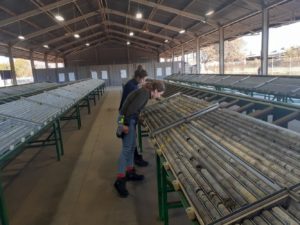 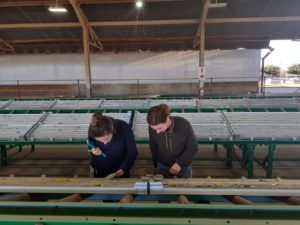 Ellen and Rhiannon looking at core in the Northern Limb Exploration Core Yard.

Ellen Mullarkey graduated from Trinity College Dublin in June 2019 with an Honours Bachelor degree in geology. Her dissertation was a mapping project, focused on reconstructing the tectonic and palaeo-environmental history of an area of the Variscan orogenic belt in the Cantabrian mountains of north-west Spain. Ellen became interested in a career in mining through her involvement with the Society of Economic Geologists (SEG) Trinity College Dublin student chapter. During her final year of university, Ellen served as President of the SEG chapter, organising field trips and mine visits both in Ireland and internationally, as well as acted as the Women in Mining representative at the university.

Rhiannon Jones graduated from Imperial College London with an integrated master’s degree in Geology in June 2019. Her master’s dissertation was on a geochemical vectoring study around a porphyry deposit in Serbia, working with Rio Tinto. Prior to her internship with Anglo American, Rhiannon worked as a research assistant at the London Centre for Ore Deposits and Exploration, based at the Natural History Museum, as well as an exploration geologist intern for Rio Tinto, where she was involved in mapping and sampling as part of a grassroots copper exploration project in Serbia. She initially became interested in mining during a work experience placement with SRK Consulting, whilst still at school. This experience motivated Rhiannon to study Geology at university and pursue opportunities within the mining sector.